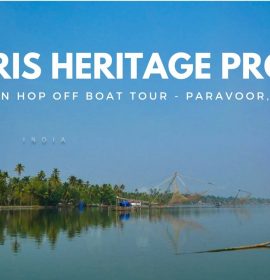 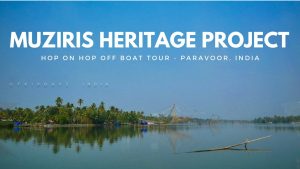 Muziris Heritage Tourism
The Government of Kerala has been contemplating the creation of the Muziris Heritage Project from 2006. However, realizing its potential impact, the Government has initiated and ambitious project to encompass a larger area including North Paravur and Kodungallur Taluks, which have various protected monuments.

The Muziris Heritage Site (MHS) stretches across from the two municipalities of North Paravur in Ernakulam District to that of Kodungallur in Thrissur District and includes four Panchayats in Ernakulam District, which are Chendamangalam, Chittattukara, Vadakekkara, Pallipuram, and two Panchayts in Thrissur District, namely Azhikode and Methala. Although a large number of pilgrims visit the various temple, churches and mosques during the festivals, the number of tourists who presently visit the protected monuments are few. However, Cherai Beach, in the project area is a major tourist destination.

Muziris
Muziris was an active port in the 1st century BC, though it is still not known when the city-port was established. The merchants of Muziris had instituted Indo-Greek and Indo-Roman-Egyptian trade with Jews, Arabs, Portuguese, Dutch, Chinese, British, and many other travelers. The monuments from the Muziris era speak Volumes. However, these monuments to tourists, whether foreign or local. As our industrial consumer society developed, during the last four decades, it has done serve damage to our natural and built environment.
“ The enjoyment of our heritage depends upon its conservation… World Heritage demonstrates that the industry, craftsmanship, love and care of past civilizations were givento make their surroundings meaningful. THIS SHOULD NER CEASE TO FILL US WITH WONDER. THE PAST CAN SPEAK TO US AND HELP US REALIZE WHERE WE ARE GOING IN THE FUTURE.”

In 1341, the profile of the water bodies in the Periyar River basin, on the Malabar Coast in Kerala underwent a major transformation. The prosperous city-port of Muziris, at the mouth of the Periyar, overlooking the Arabian Sea, suddenly dropped off the map, due to a flood or earthquake, or both. Muziris was silted over and its site was left to conjecture. The excavation by the Kerala Council for Historical Research (KCHR), in 2007 & 2008 unearthed valuable information that threw light on its location and more. The archaeological and historical data gathering on “Muziris” since then, provides further evidence to show that it was a veritable business and cultural centre, with far reaching international associations. It is found that, Through the Muziris trade channels, the people of South India were afforded connections and opportunities with many civilizations in Western Asia, the Near East, Europe and further. This excavation project has proved tobe a turning point, as the wealth of information now available is not only on the port, but also on its hinterland, the whole Periyar Basin, and the historic towns of Kodungallur, Pattanam and Paravur 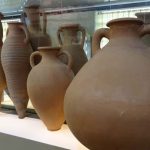 Pattanam is one of kerala’s first ever archaeological sites to yield significant evidence of lands eventful
past.hundreds of amphora jar fragments,West Asian And mesopotamian pottery,small golds,lead and copper ornaments,brick structural remains,human bones,roof tile pieces etc..have shed light on Kerala’s maritime trade partners of the distant past.Also discovered here were a wharf complex,bollards to secure boats,warehouse remains and six metre dugout canoe that was carbon dated to the first century BCE/CE, supporting the theory that pattanam could be part of the legendary hinterland port site of muziris,as portrayed in ancient Greek,Latin,,classical Tamil sources 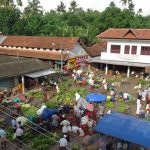 Close to the jewish street and synagogue,the market is situated on the banks of the backwaters.One can stillpicture fresh produce unload of on ‘Vanchis’,traditional kerala boats that are used to this day,to ply the backwaters.Some of the traditional building still satnd here amidst newer more modern constructions.
*Nearest railway station: Aluva, about 18 km; Ernakulam Town, about 31 km
Nearest airport: Cochin International Airport, about 21 km 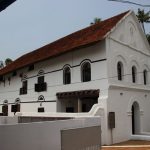 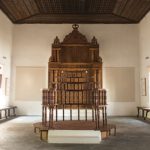 Found on the erstwhile jewish street paravur,this synagogue was build in 1615.the synagogue is a great study of jewish life,the social hierarchies,mative cultural influences on the immigrant jewish community evident in the architecture.It is also among largest surviving synagogue in kerala.
*It is located about 100 meters from Paravur-Kodungallur Road in NH-17.
Nearest railway station: Aluva, about 17 km and Ernakulam, about 27 km.
Nearest airport: Cochin International Airport, about 20 km. 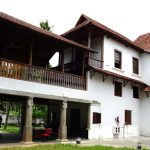 Traditional home of the paliathu achans,it came to be called ‘Kovilakam’ or place after the then paliath achan hid the king in his home,when the royal house was threatened by the Portuguese.In appreciation to the paliath achan’s services,the Dutch renovated the home in Chendamangalm.The two storey structure was an efficient and functional edifice fae ahead of its times.the building featured sweeping staircases,balistrades,insulated interiors and a ‘Prassnaga peedam’where the ministers could address the people.
*Nearest railway station: Aluva,about 19 km and Ernakulam,about 31 km.
Nearest airport: Cochin International Airport,about 22 km. 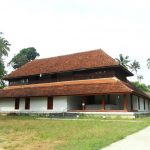 Build in 1786,the nalukett is a typical self-contained Malayali house,a quadrangle building consisting of four blocks aroud a ‘Nadumittam’ or central courtyard.The women and minor boys of the paliam lived here.The western block or “padinjattini” is divided into three rooms the middle one of which is the private strong room or “ara” where all the valuables and house hold deities are kept.The north east block or “Vadakkini” si divided into two parts,the kitchen and dinning room.The whole or the middle portions of the eastern and southern blocks “kizhakinni and tekkini’ are open halls where guests were received.The upper floors consist of bedrooms for the women.
*Nearest railway station: Aluva,about 19 km and Ernakulam,about 31 km.
Nearest airport: Cochin International Airport,about 22 km.

6)KOTTAYIL KOVILAKAM JEWISH CEMETERY
Situated in the village of Chennamangalam,this historically significant site once housed the palace of the Villarvattom king or the ‘Villarvattom Swaroopam’.The palace was located within in a fort or kotta and hence the name ‘Kottayil kovilakom’.Besides the chennamangalm synagogue and the cementary in the valley below,in close proximity are also the Sri Krishna twmple atop a hill,a mosque and christian church.It is the in fact,the only place in India where a temple,synagogue,masjid and church exist in perfect harmony within a 1 km radius.
*Nearest railway station:Aluva,about 18 km;Ernakulam Town,about 31 km
Nearest airport:Cochin International Airport,about 19 km

Constructed during the 17th century on land donated by paliam family,the Chennamangalm synagogue is arguably one of the oldest in Kerala.At the very entrance is the fragment of a tombstone of a women that died in 1264 AD.Other fragments of tomb engravings have also been renovated and revived to its former glory by the govt.of Kerala,and now houses a small museum of earlr jewish life in kerala.
*Nearest railway station: Aluva, about 18 km and Ernakulam,about 29km.
Nearest airport: Cochin International Airport,about 23 km 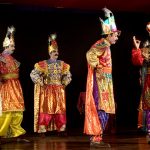 No trip to the region is not complete without a visit to the island of gothuruthu on the river periyar,to catch a live perfomance of the unique maritime theatre form -Chavittu nadakam.this stamping theatre is believed to have been introduced by the portuguese missionaries who came to kerala in 16th century,following the arrival of vasco Da Gama.The european form was merged with local perfomace modes,resulting in a new native art form with biblical themes,western outfits,aesthetic elements of European opera combined the facial expressions of classical Indian form.Gothuruthu is also famous for its portuguese-inspired cuisine which includes over 100 varieties of sea-food recipes.
*Nearest railway station:Aluva,about 22 km; Ernakulam,about 33 km
Nearest airport:Cochin International Airport,about 21 km 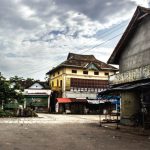 Quite possibly one of India’s oldest markets,the kottapuram market was established in 1790 under the aegis of Sakthan thampuran the king of kochi.Built on the banks of the waterways,it was serviced by 2 boat jetties that allowed goods to be brought in on small country boats that plied the region.Even though is gas lost much of its former glory,this once thriving nerve centre of Kerala’s foreign trade,still functions to this day,albeit in a more modern guise.the old waterways have now been transformed to allow leisure cruises and eateries dot the waterfront promenade,which also features a small amphitheatre.
*Nearest railway station:Aluva,about 26 km;Ernakulam,about 36 km
Nearest airport:Cochin International Airport,about 26 km 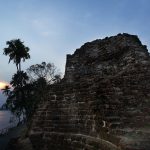 Build by the Portuguese in 1573,the fort played a significant role in many wars between the zamprins of Kozhikode and the rulers of Kochi.it was later captures by the Dutch,following a heavy fight in which the fort was all but destroyed.the Dutch,in their turn,maintained the fort as an outhouse to guard trade ship.The strategic position of the fort,on the mouth of periyar,gave control of sea port to whoever commanded the port.
*Nearest railway station:Aluva, about 27 km;Ernakulam,about 37 km
Nearest airport:Cochin International Airport,about 27 km 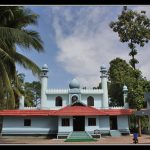 Along the Parur-kodungallur road,stands the first and oldest mosque in India.Build by Malik Ibn Dinar in 629 AD,The cheraman Juma masjid has undergone multiple renovations and expantions over the years,but retains the original santum sanctorum untouched and still preserved.Legend has it that the Cheraman Perumal went to arabia,where he met the prophet and embraced Islam.He sent letters with Malik Ibn Dinar to his relatives in Kerala,Asking them to hospitable and courteous to the letter.It has also been postulated that the site was an ancient budhavihar that was gifted to the muslims for construction of a mosque.
*Nearest railway station:Aluva,about 26 km;Ernakulam,about 36 km and Thrissur,about 38 km
Nearest airport:Cochin International Airport,about 28 km 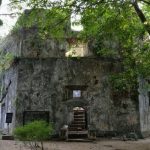 Possibly one of the most coveted and contested fort in Kerala,pallipuam was build in 1507 by the portuguese.In 1662,it wsa attacked and occupied by the dutch.But itsstrategic position interested the mysore rulers who attempted to buy it from the Dutch,but the english east india company interfered and terminated the proposal.In 1789,the ruler of Travancore purchased both the pallipuram and kottapuram forts together,ensure complete control of all sea trade in region.The fort lost its significance and was abandoned only after the east India cpmpany took over the entire malabar region.A memorial was erected in front of the fort in 1902 and stands to this day.
*Nearest railway station:Aluva,about 25 km;Ernakulam,about 34 km
Nearest airport:Cochin International Airport,about 30 km.

Route map of the sites: 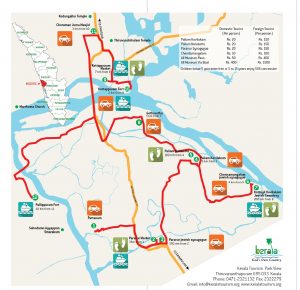 YOU MUST LOGIN TO SUBMIT A REVIEW 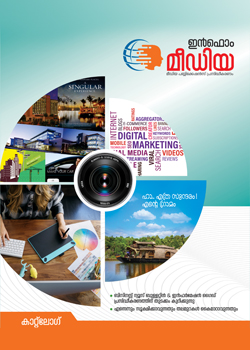